14 Things to See and Do in Mason City, Iowa on a Weekend Getaway

14 Things to See and Do in Mason City, Iowa on a Weekend Getaway

The city of Mason City, Iowa is located just east of Clear Lake in northern Iowa. A small town which is known for its rich history in architecture. It is a small town located in the Midwest along the Winnebago River. I have driven through and by several times until recently I had a chance to spend a couple of days exploring the rich cultural history in River City. It is not a far drive from the Twin Cities or Des Moines. If you are looking for a couples getaway or a girl’s weekend getaway, here are some of the top things to see and do in Mason City.

Disclosure: This post may contain affiliate links which means I earn a small commission on your purchase. Learn more here.

The Historic Park Inn Hotel is the place to stay while you are in Mason City. This hotel, located in downtown Mason City, is the last remaining hotel that was designed by Frank Lloyd Wright. The hotel is listed on the National Register of Historic places list and offers so much rich history.

The hotel was built in 1910 for 155k dollars and was built to have five functions all under one roof including a law office, hotel, a bank (City National Bank building), restaurant, and retail space. A famous architect Frank Lloyd Wright was invited to design the concept. At the time the 43 hotel rooms were built 10×10 with a bed, dresser, and sink in the corner with a shared communal bathroom at the end of the hall. After many falls and struggle over the years a non-profit group, Wright on the Park, came together to raise money and fight for the historic preservation of the Historic Park Inn Hotel. The restoration was completed and re-opened for business in 2011.

Today, the hotel consists of 27 rooms which are all unique and contain the same architectural style Wright and give visitors a chance to experience Wright’s distinct style and design. The rooms are modern and comfortable with WiFi, television, and more.

During your stay make sure you enjoy a beverage in the basement of the Historic Park Inn Hotel at The Draftsman. They are known for their Old Fashioned, billiard games, pop-up live music, snacks, and more. After your cocktail head up the stairs for dinner and dessert at Markley & Blythe. All food is made from scratch and menus are seasonally driven by what is available.

You will enjoy all of the unique and filling dishes Markley & Blythe has to offer from Street Corn Scallops, delicious Potato Rolls, or the Beef Wellington (which takes about 40 minutes to make!). Everything tastes as good as it looks. The ambiance and staff top it off to make it a wonderful evening before you head up to bed. Make your reservation today!

While visiting the Historic Park Inn Hotel walk across the street to the First National Bank. This historic building holds the story of notorious bank robber John Dillinger. John Dillinger and his crew  Baby Face Nelson, John Hamilton, and Tommy Carroll broke in and stole $50,000 in March of 1934. During the heist, Dillinger was shot at wounded. Another incredible story from Mason City, Iowa history. Today the building consists of housing units and offices.

The Frank Lloyd Wright Stockman House was Wright’s first Prairie School-style building in the state of Iowa and a residence for Wright and his wife. Today, the house is open all year-round for tours and a chance for others to take in Wright’s collection of Prairie School architecture and learn more about his history. Beyond the architecture and history of the house and Wright, the house had to be moved 4 blocks to avoid demolition in 1989.

Wright on the Park

While in this north-central Iowa town, reach out to Wright on the Park to set up a tour. Wright on the Park offers tours of the Historic Park Inn Hotel and a walking tour to take in all of Prairie School architecture through the Rock Crest – Rock Glen Historic District. Do not miss the Willow Creek waterfall! The 90-minute tour will take you through the history of Mason City, houses designed and built by Walter Burley Griffin, William Drummond, Francis Barry Byrne, and Curtis Besinger, the influence Wright had on the architecture during that time, and much more. Mason City has been named one of the top most important architectural destinations and this tour will help you catch all the important history.

The Charles H. Macnider Art Museum is a Tudor-style building full of art and history. The Charles H. Macnider Museum is free for visitors. Most famously you will find the collection of Bill Baird’s puppets used in the 1965 Sound of Music. In addition, the museum holds many other puppets with a fun kids area, contemporary art, sculptures, and more.

As you make your way through Mason City you may come across several fun sculptures on display. The River City Sculpture on Parade is run by a non-profit whose goal is to bring a vibrant public art display to the city. The parade is a 1.7-mile walking tour. The sculptures are owned by various artists and loaned for one year. At the end of the year, they become available for sale or lease. To add a little bit of fun the public is encouraged to vote for their favorite each year and the winner wins “The People’s Choice Award”.

If you make a visit to downtown Mason City you are sure to come across Central Park. Central Park was a gift from John Long and George Brentner. It is a wonderful shady park located across the street from the Historic Park Inn Hotel. Take a walk, listen to live music, and walk by The Civil War statue that was placed there in 1884. You will find many shops and restaurants that surround the 2.2 acres of park in the heart of downtown.

Fan of the Music Man? Claimed to be the best musical by many, you will not want to miss this fun destination. Music Man Square focuses on Meredith Willson and is a streetscape from 1908. It included an ice cream parlor, home of the first Grammy awarded to Willson, memorabilia, and much more. Admission into Music Man Square is $10 for adults and $8 for children.

Before you leave Music Man Square, make sure you take a tour of Willson’s boyhood home. This 1895 restored home includes original pictures, and artifacts, and learn more interesting facts about Willson’s childhood during the tour.

While in Mason City enjoy some outdoor recreation in Cerro Gordo County. The Lime Creek Nature Center is located on top of a bluff above the Winnebago River. Take in the wildlife, enjoy aquarium displays, a flowing water habitat, and more. The Lime Creek Nature Center is the location where John Long and his family settled in Mason City in 1854. They were one of the early inhabitants of Cerro Gordo County. Surrounding the nature center you will find acres of forest, ponds, and grasslands to explore.

Plan your visit to Mason City, Iowa for Memorial Day weekend! Each year the North Iowa Band Festival is held which is the largest free marching band competition in the Midwest. The festival includes free entertainment, a carnival, a marketplace, and a big parade.

Enjoy one of the best steaks in Iowa at the Northwestern Steakhouse. It is considered one of Iowa’s most iconic restaurants it opened in 1920. They are known for their melt-in-your-mouth steaks, ambiance, and simple menu. You will definitely want to cross this off your Iowa bucket list!

If you love fresh Mexican food Avion Azul is a must! This restaurant is located in the new Mason City Municipal Airport. They offer fresh ingredients, margarita flights, and a fun view where you can watch planes land and take off.

Mason City is located just 10 miles east of Clear Lake, Iowa. Extend your stay in northern Iowa and explore everything Clear Lake has to offer including the Surf Ballroom where musicians Buddy Holly, Ritchie Valens, and The Big Bopper played their last show before their plane crash. 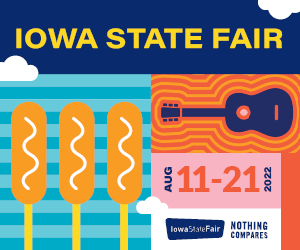 One thought on “14 Things to See and Do in Mason City, Iowa on a Weekend Getaway”