The Real Connection Between You, Your Child and Good Health 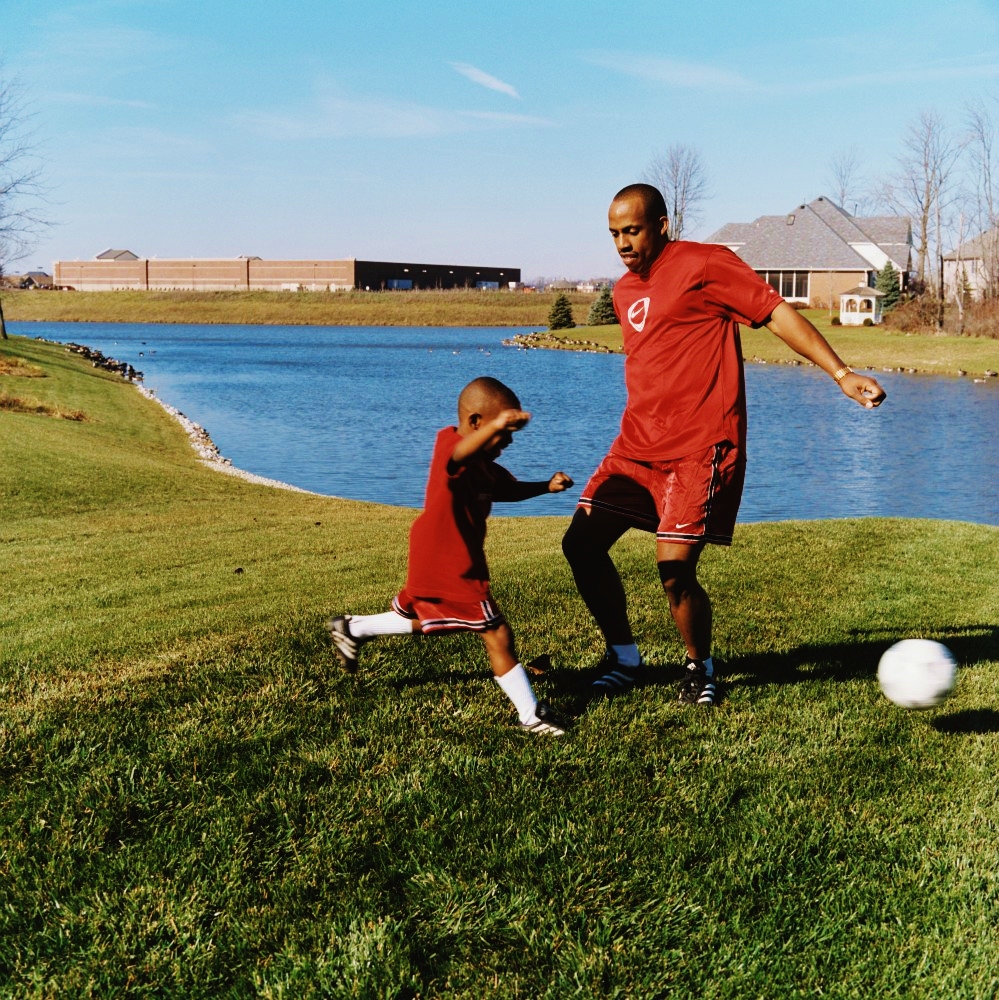 Today was a day like most any other day, as it included what I affectionately call the “nice-ninety“.  The “nice-ninety” are the best 90 minutes of each and every day of the work week.  No, I don’t sneak off somewhere for an extended lunch hour.  No, I don’t leave the office to take a nap.  No, it doesn’t include some X-rated activity.  The “nice-ninety” is just as it sounds a nice ninety minutes.  What makes the ninety-minutes so nice?  What do I do for these nice ninety minutes you ask?  What else! I spend them with my son or as I affectionately  call him Supaman.

For the last eight years, many of the moments which make up the nice-ninety have been spent in the gym or traveling to and from the gym with my son.  Even in the midst of some of our most trying and cantankerous training days – on the soccer field or on the track – I always remind my son during and after our training that “these moments are the best moments of my day”.

As time has gone by and I have had the fortune of talking to other parents and watching other out of shape and overweight parents yelling at their children from the sidelines and stands, I have come to realize just how much every parent and child could benefit from a “nice-ninety” or even a “special sixty” (when you just can’t find ninety minutes in the day).  There are two immediate benefits I believe all parents and children could profit from if they shared time in their day the way my son and I do.

The first such benefit would be social/human connectedness.  Let’s face it; Americans are becoming less socially connected.  Sure we text, email, tweet, Facebook, Google+, Skype and instant message one another but let’s not confuse this form of communication with real human interaction.  I know that this is going to sound “old school” but we simply don’t value human contact the way our ancestors did.  Strangely, many of the peers I most respect and the seniors whom I grew up admiring sadly seem to prefer non-verbal communication, 140 characters or less, even with their own children.  People of all ages are beginning to dismiss the value and importance of face to face human interaction.  I can’t even begin to tell you what a shame I believe this to be.

The second benefit would be health related.  I don’t know if you have noticed but America is growing (no pun intended) increasingly fat and sick.  The number of adults and children who are categorized as obese grows exponentially each year.  The number of adults and children who suffer diet and exercise related illnesses such as diabetes, high blood pressure, etc. grows astronomically each year as well.  Our health issues much like our communication issues are easily solvable.  As our children’s first and best role models, the more we value our time with our children and the more we value our own health, the more our children will value human contact and the greater value that they will place on their own health.

I have experienced firsthand the value of human interaction and the importance of being my son’s health role model.  In December 1999, six months before my son’s fifth birthday and seven months before my thirty-fifth birthday, I reluctantly and I do mean I reluctantly weighed myself.  To my surprise, I was more than 30 pounds overweight.  By some measures, I would have been considered obese.

Here I thought that I was being a great dad and role model by working long days and moonlighting – like so many American parent’s believe that they should do – striving to provide my son with everything he could ever want and need from a material standpoint.  Without realizing it, I was unknowingly engaged in a process of being disconnected with my son while simultaneously watching my waist line balloon.  As if it couldn’t get any worse, I was actually shortening my life – the time that I would be able to spend with the most important person in the world.

One morning in December 1999, while my wife was asleep, I awoke in the wee hours of the morning.  My intentions were to do what I did almost every morning – go into the home office to work for a few hours before getting my son ready for school.  Unfortunately, I never made it to the home office.  Actually, I only managed to get out of bed and walk a couple feet.  Instead of walking to my office, I walked into the bedroom closet which was out of my wife’s view in the event that she woke up.  I did not want her to see what was happening.

I never made it out of the bedroom because I thought I was having a heart attack.  Poor diet, little to no exercise and the stresses of life had taken their toll on me.  At that very moment, I knew I had to change.  What I didn’t know, at that time, was the profound effect my health changes would have not only on me but on my son.

Three months after the event in the closet, I had dropped about 25 pounds.  My body was different: leaner and more muscular.  I looked and felt younger.  Everyone noticed my physical change especially my son.

As flattering as it was for my son to be the son of the father with muscles, he was not satisfied solely with my new status.  My son wanted to be the “muscle son”.  If I had muscles, he had to have muscles.  As if by vicarious association, the more conscientious that I became about what I ate, the more conscientious my son became about what he ate.  If I was going to work out, he demanded that I help him workout.

So I introduced him to what I thought were age appropriate exercises.  However, before long, working out at home doing calisthenics and other body weight exercises became unacceptable to him.  He wanted to work out with me at the gym.  Unfortunately, every gym that I inquired about a membership for him told me he was too young to exercise at the gym.  {Note: I believe this thinking and application of when a child should exercise is flawed, a contributor in the social disconnect of parents and children and a factor in the poor health of Americans.}

For a couple years, I was able to satisfy my son’s insistence to workout with me by purchasing medicine balls, bands, videos and other resistance free body weight gadgets that we could use at home together.  However, just before his ninth birthday, he began to incessantly beg me again about taking him go to the gym with me.  I inquired with the childcare provider at my gym about my son’s request.  The childcare provider openly welcomed him to the Kid’s Room but he was having no part of that offer.  He protested vehemently the thought of being with as he described them “those little kids” and further commented about the way the room smelled.  So I tried to pacify him by reminded him about all the wonderful home gym equipment we owned.  He was not having the home gym equipment.  He was done with that.  It was the gym with dad or bust.

In short, he just wanted to be where I was.  If I was pumping iron, he wanted to be pumping iron.  If I was running on the treadmill, he wanted to run on the treadmill.  What was I to do?  You guessed it.  Like all good fathers, I let my soon to be nine year old son’s compelling arguments about good health, “ those little kids”,  the “stinky” Kid’s Room and his crocodile tears – mainly his crocodile tears – convince me to allow him to join a health club.

How did he join a health club at almost nine years old you ask?  You guessed correctly again.  Like all good fathers, I lied on his application.  I know, I know…not a great role model moment.  Although, you know what happened, after lying about his age to get his membership, other parents and adults marveled at his desire to be fit and healthy.  The little kid who worked out at the gym with his dad became the talk of the health club.

My son soon developed an appreciation for the work ethic required to find success at any subject on any level.  Training with me, helped him find the athletic success that he once thought impossible due to his small stature (always in the bottom 10 – 25 percentiles for his height and weight).  Moreover, my son began to understand that life and all that we hope to accomplish is a process much like the process his dad underwent to change his health and subsequently his life.

Today when I spend my “nice ninety” with my son, I don’t have to spend as much time instructing him on things like his weightlifting form or his running technique.  Instead, we have ninety minutes of real human interaction.  We talk about school, politics, things he values, his friends, comic books, spirituality, movies, girls/women, video games, music, technology, things that I have done to make him mad…etc.  Anything and everything is on the table for discussion and it doesn’t have to be done in 140 characters or less and it never includes LOL, ROFL, SMH, BRB or any other ridiculous abbreviation.

We fist pound, slap hands, pat each other on the back, spot each other during heavy lifts, yell out encouraging words when lifting and when we are finished with our workout, we do what we did when we started training together more than eight years ago – we hug!  As if spending quality time with my son was not enough, we enjoy an added benefit.  We are having face to face human interaction while doing something good and necessary –  exercising – which helps humans live longer and more satisfying lives.

Now let me ask you what in the world could be nicer than this? 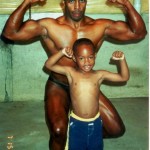