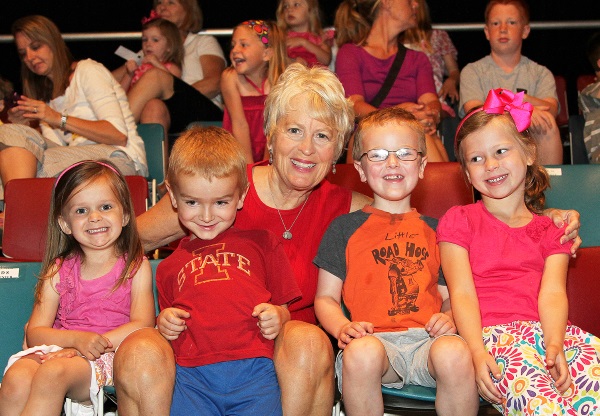 Looking for a fun, interactive theatre show for your kiddos aged 4-6?   Then look no further than Friday Funday at the Des Moines Community Playhouse Children’s Theatre.

More about Friday Funday: Join the Clubhouse at the Playhouse Gang each month, November-June, as they dramatize a favorite story using their imaginations and the costume pieces and props they find in their magic trunk. Audience members learn the Clubhouse pledge and secret handshake, and listen for the word of the day. Friday Funday is a creative participatory story theatre program for children ages 4-6. Performances are at the Playhouse at 9:30 AM, 10:30 AM, and 1:30 PM. Shows are approximately 45 minutes in length. Admission is $6 per person, adults and children. Reservations are suggested and can be made by calling the Playhouse box office at 515-277-6261 or purchase tickets here.

November 21:  The Golden Goose
A father had three sons, but only one was unselfish enough to help a hungry, old man. Will the man’s gift of a golden goose (with especially sticky feathers) be enough to make the gloomy princess giggle?

December 12:  The Gingerbread Man
Run, run, run as fast as you can! You can’t catch me, I’m the Gingerbread Man! This cutout cookie leaps out of the oven and into a grand adventure–that is until the sly, hungry fox comes along.

January 23:  Snow White
Snow White is banished from the kingdom by a jealous queen because she is too beautiful. Things look up for her when she happens upon a small cottage in the forest.

February 13:  The Mitten
In this Clubhouse at the Playhouse favorite, a young child drops his mitten in the snow and does not realize it is missing.  As woodland creatures seek warmth inside the mitten, it magically grows and grows!

March 6:  Fin M’Coul
Will Fin and his wife, Oonagh, be able to outwit the giant, Cucullin?  Come help celebrate St. Patrick’s Day with this folk tale from Ireland and don’t forget to wear green!

April 17:  The Leopard’s Drum
Leopard has a drum, but he won’t share it with anyone else.  Is Turtle smart enough to get the drum and earn a shell as well?

May 15:  Goldilocks and the Three Bears
Goldilocks has been very naughty. She has eaten the bears’ porridge, broken their chairs and all of this without even knocking! Will the bears get home in time to catch her in the act?