Think Outside the Box and Create a Game!

Think Outside the Box and Create a Game!

Some moments we replay on an endless loop.  Sunny Sunday, April morning.  We had loaded into the car after Sunday services, and I was pulling out of the church parking lot.  For that quarter I had been teaching both our kids’ Sunday morning Bible class, and I was naturally curious about what they thought of it.  So I asked, “Did you enjoy my class?”

My son and daughter both replied in unison.  “Because you talk too much.”

I realized immediately that I had a problem, but I did not know what to do about it.  I needed to switch things up, to find a new way to engage not only my own kids but also the rest of the class.  For the rest of the week, I mulled over what I might do instead, and on the following Saturday morning just as I was waking I had a light bulb moment.  Why not make a game?

The subject for the quarter was “The Decisions We Make” and the topic for my next class was to be “The Friends We Make”.  So I made a game which I called, Good Friends, Bad Friends, Very Bad Friends.  I spent the entire day that Saturday designing this game, using poster board, cut-up business cards, dice, and colorful glass beads.  I have no artistic ability at all which was quite apparent from what I initially put together.

This, of course, was merely a prototype.  But what most of us do not think about is that all games – even video games – begin as a prototype.  Often these prototypes are extremely simple but have the structure and concept of the final product which often follows months or even years later.  In our case, we realized we had a viable concept and formed a team to turn our game into a marketable product.  We renamed our game True Frenemies.

It has been said that each of us has at least one game inside just waiting to be released.  Designing and building a game is naturally highly creative as well as an educational process.  It is also one that literally any family can do together.  This is a great activity to allow your kids to take control.  After all, children are generally far more creative than their parents.  Why not let the creativity of your children shine?  Provide the parameters, the steps, and then set them free to see what they create!  And once they have finished, you will be amazed at what they can accomplish on their own.

Step One:  Choose a Topic

In some cases, you will know the topic from the start.  As with my case, I needed a game that taught about friendship and how friends sometimes treat each other.  (In the interest of full disclosure our game, True Frenemies, has evolved to far more than just friendship.)  Maybe you are teaching your kids a certain topic that you wish to reinforce.  If you are homeschooling your children, you may have a certain subject from history, literature, math, or science.  Perhaps you want to combine math and literature and encourage your children to find their own connection.

In other cases, you may wish to give your children a blank slate and ask them to develop their own topics.  In this case, you may ask them to make a list, to brainstorm.  They can then list the advantages and disadvantages of each idea and maybe vote on them, give a numerical score.  Maybe they can even think at this stage how each idea might be turned into a game.

In any case, this initial step should be very fun and interesting for your kids.  Allow them to question, to go down rabbit holes on their own.  Don’t tell them that an idea won’t work.  Let them run and realize it themselves.  Maybe they will surprise you and turn a seemingly hopeless concept into a totally unique game!

Once they have a concept or a topic, many first-time game designers make the mistake of jumping straight to their game’s win condition.  Instead, we should focus on what type of game we wish to make.  Often, the win condition will follow naturally from the mechanics we wish to introduce into our game.

The simplest type of game to design is one based entirely on a deck of cards.  These are not the typical playing cards with spades, hearts, diamonds, and clubs.  Rather, the cards are specifically designed to reflect the topic or concept that has been chosen in Step One.  A card-based game may include building a deck by drawing cards and either keeping or discarding the cards in your hand.  Alternatively, it could involve trying to get rid of cards that have been initially dealt with and drawn.  In card games, you may use cards against other players or perhaps even team up to achieve some objective or overcome some obstacle.  The cards may be abstract or very literal.  In any case, a card-based game can be quite fun, easy to prototype, and the most straightforward as well as least expensive to turn into a commercially viable product.

Board games are naturally more complex to develop than simple card games.  In fact, many board games will often involve one or more decks of cards to be used along with the game board.  No matter our topic or theme, we need to consider exactly what type of game we wish to design by using our board. The below elements are neither exhaustive nor necessarily mutually exclusive but should provide some basic ideas to begin your game design.

A “Roll and Move” game is the most basic and one with which your children will likely be most familiar.  This type of game will have a game path that must be followed to some terminal objective.  Along the game path, players will encounter various types of spaces that will involve some action or consequence.  For educational purposes, this type of game is often the most straightforward to design as well as execute.

Military-style, adventure, as well as conflict-inducing games that typically involve a map, are most conducive to a conquer / area control mechanism.  Children typically love to draw or trace maps, and if their topic is of a historical or Biblical nature designing this type of game may be quite natural.

If the game is economic in nature, then a Resource Gathering design may be the most appropriate.  These resources may then be used to make purchases, to build structures, or to fund expeditions.

Of course, trivia games can be either card-based or board-based.  Trivia games can be directly related to literally any educational topic, but to be interesting they must involve something more than simply asking and answering questions.  Trivia can certainly be mapped into various game designs so that they are simply one element rather than the entire basis for a game.

A fixed game board will never change from game to game.  A fixed game board maybe a map, a path, or an abstract design.  A dynamic board is one that will change from game to game and often involves hexagonal pieces that are spread out as tiles as the game progresses.  A dynamic board game may emphasize discovery, exploration, as well as storytelling.

Games of chance often have the players live and die by rolls of the dice.  Of course, very few games are entirely based on chance (e.g. the lottery), but most do involve some element of luck.  It is important to realize that including some element of chance is not necessarily a bad idea with games as luck is the great equalizer.  With games of pure skill (e.g. chess or Go), lesser players may become easily discouraged and give up.  Luck allows anticipation, providing the opportunity for a novice player to stay with those who are far more experienced.

With some games all players win or lose together.  In other games, only one player can win.  Cooperative games have the benefit that no one’s feelings will get hurt.  The drawback with cooperative-style games is that often one player will dominate and make decisions for the entire group which is not enjoyable for anyone.

Games involving social deduction have players try to guess some hidden roles or facts about one or more of the other players.  Games with social deduction often facilitate a great deal of communication among the players and make for a more interactive experience.

If your child has any artistic ability, this would be their moment to shine.  If they do not, they need not despair.  A prototype game need not be a work of art.  It only needs to get the job done, and it can be just as much fun to play as a professionally designed out-of-the box product.  In fact, this stage of the process is little more than a scavenger hunt in your house, at the local office supply store, or at a big-box retailer’s art department.  At this point, you will know what you need to do and to get, and it is just a matter of finding what you need.  Make your list and then find what you can or the next best thing!

Step Four:  Play-test and Play Together!

Your child’s game may be a total disaster, a fiery plane wreck on the tarmac.  It does not matter.  All games begin as the prototype fails.  But find the kernel of fun in what your child has made.  Praise the good parts and allow them to recognize what does not work as well as to find ways to fix the problems.  As much as possible, let your kids use their own ideas even if you feel that you have something better.  Your child will feel much more pride designing something on their own with minimal parental input than to play the pensive, passive bystander as you take control.

But, most importantly, sit down and play your child’s game as a family.  Let them explain to you how it works, the rules, the mechanics, and perhaps even tips on strategy.  In doing so, your child will rise to the most advanced level of cognition from Bloom’s taxonomy:  Creation.

Derek White is a risk manager at a large, financial-services firm in the Des Moines area who woke up one morning and decided to make a board game.  Actually, he did not make just one board game.  That would have made too much sense.  In a momentary lapse of reason Derek went and printed 20000 pounds of games.  With impeccable timing, the shipment arrived just before the world began to completely shut down.

This board game, True Frenemies, is now available nationally through Christianbook.com, the Rainbow Resource Center, Amazon, as well as his own website, www.mount21.com.  True Frenemies is also available locally at The Learning Post and Toys, Choices, Divine Treasures, Hidden Treasures, Café Hope, as well as Mayhem Comics.

Ninja U for Kids in Ankeny, Iowa 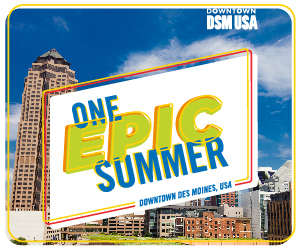